Duo The Shaedon Resurgence, 2 and 3

The Empire’s capital lies in ruins after the devastation at the hands of Räz Numera, known by many as the Harbinger of Death. Sentenced to a life in solitary confinement, he continues to work on unlocking the memories implanted in his brain in hopes of finding a way to defeat the Shaedon.

Meanwhile, Netherea’s occupation by the Shaedon continues unabated. They forge ahead with their plans to destroy the planet, despite the defeat of the Architect. How they manage to bring resources to the planet remains a mystery to everyone. However, the Alliance and Empire are combining forces to liberate the planet.

Convinced that the key to bringing down the Shaedon is hidden within the ancient Luminar tomes, High Councillor Máraxi Wihara of the Ninth Circle orders her best to gather all missing volumes to unlock the Prime Spell of Air, which is said to be the Xoron’s only hope for redemption. 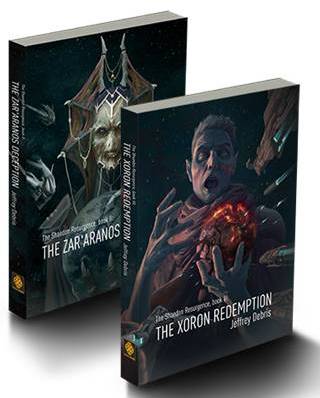