The Shaedon Resurgence, Book I – The Fall of Netherea

The mix between science fiction and fantasy in this series works really well. The number of characters is quite big, but they have enough depth to enable the reader to follow their inner workings. This makes the story logical and

With “The Fall of Netherea,” Book I, author Jeffrey Debris launches his exciting and captivating trilogy, “The Shaedon Resurgence.” The race is on to save the destabilized planet Netherea which will be destroyed in a matter of years along with

Philip Fontana
4 out of 5

Wonderful debut by Jeffrey Debris. I enjoyed this book from start to finish. Even though the book contains a lot of characters and they are introduced in a rapid succession, it was easy to follow and remember. In my opinion,

The first in afantasy/sci-fi trilogy that lets you switch between main characters to reveal the unwelcome truth. Most of the times I can’t even remember two characters, so this was going to be a challenge for me. Honestly I prefer

Danny Wijnants
5 out of 5

Let's start by saying that SF is far from my favoriet genre. I've recieved this book as a present and therefore decided to give it the benefit of the doubt. I must admit I was pleasantly surprized from the very

Excellent, very engaging book from Jeffrey Debris, who combines different genres seamlessly and takes you on a thrilling adventure. It begins small... in a field and Jeffrey takes time to make a proper introduction of each the characters involved in

Over the past 60 years I have read countless books of Science Fiction, Science Fantasy and Fantasy from Aasimov, Clarke, Wells to the modern authors such as Feist, Sanderson,Jordan etc. and it is always nice to see new authors emerging.

Alan Ackerley
4 out of 5

Tazzy Jeninga
4 out of 5

Martin Kraaijer - SF Terra
5 out of 5

12 beoordelingen voor The Shaedon Resurgence, Book I – The Fall of Netherea 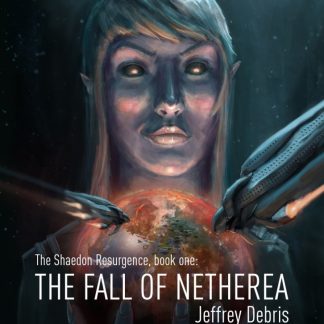